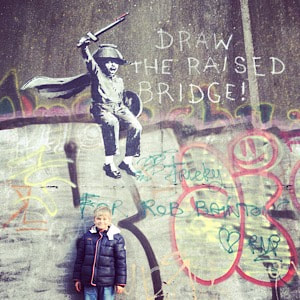 ​​BANKSY HULL
​How lucky are we to have our very own Banksy in Hull? The rumours started circulating on Thursday that a Banksy had appeared on the Scott Street Bridge just outside of the centre of Hull. This now disused bridge, in itself is something special. Constructed in 1901, it was closed in 1994 after becoming too weak to carry the traffic. Permanently in the ‘up’ position , the bridge, bridgemasters hut, railings and lamps are now grade 2 listed.

On Friday, Banksy confirmed that he was behind the mural by posting pictures of it on his Instagram page. Hurrah and woo hoo, we do have a bonafide Banksy how exciting! More and more people started visiting it and the council, seemingly at a loss over what to do with it, chose to do nothing with it over the weekend.

We went to see it on Sunday and were quite blown away. Not just by the actual artwork itself, but also by the atmosphere there. There was excitement in the air about something so iconic appearing overnight. The Child was quite excited although he had muttered something about not liking art before we got there, but once there he changed his mind. This change of heart was helped by the fact that we were a bit naughty and crawled under the metal fence that was there in order to get a better look / better picture. The Child was quite thrilled about this sanctioned naughtiness and was reluctant in the end to cross back over from the wrong side of the fence back to the right side.  Hmmm, this does not bode particularly well for the future! I had to have a chat with him on the way home about why fences were there for a reason and why he should not normally go under them etc. etc.

So far, so good, we had a fun time, got to see some Art, got a good picture, great. Then, a few hours later, the news starts filtering through that someone had vandalised it by painting white paint all over it. Whaaaaat????  Why would someone do such a thing? How very disappointing. But then the story takes a turn, the public stepped in to Save The Banksy. The hero of the hour is Jason Fanthorpe, a window cleaner who on hearing the news that it had been vandalised, jumped in his van and headed off to the bridge. The paint had not quite dried yet and he and other people who joined in to help managed to get most of the paint off, bringing the Banksy back to life. Thank goodness for that! Community spirit – that’s what makes Hull.

The Council have finally acted and have put some perspex over the top today (Monday) to protect it from further damage. It is a little more faded than it was but it is there so that is great news.

There is speculation as to what it all means – is it something to do with Brexit? (Hull apparently was the city with the highest Brexit leave vote)- has Hull raised the drawbridge on the EU? Is it Hull not allowing King Charles entry in 1642 and raising the drawbridges? Or is it a nod to the world war 2 plan of lifting all the bridges and hiding the bridge gears to make movement across the city difficult and to thwart any potential occupation? Does it also have something to do with the pen(cil) being mightier than the sword? I don’t know, I just know that I liked looking at it and I feel very lucky to have been able to do this before it was tampered with.

Useful Information:
The Banksy is on the Scott Street Bridge, which is actually on Jenning street, off Wincolmlee (postcode HU2 0HB)