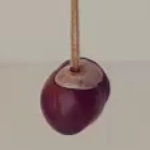 PLAY CONKERS
The first recorded game of conkers using a horse chestnut was in the Isle of Wight in 1848. Before this, it is said that snail shells and hazelnuts were used. Possible origins of the word are from the french word 'cogner' meaning to hit or knock, or the verb to conquer, or possibly from the French word Conque, meaning 'conch' (from when they used snail shells).
How to play the game:.
1. Make a hole through the centre of the conker by using a drill / knitting needle / skewer etc.
2. Thread a piece of string through and tie it securely at one end.
3. A game of conkers is for two players. Player one lets their conker dangle down (keeping it as still as possible) and player two has to try and hit the dangling conker by using a downwards motion.
4. Each player takes it in turns until a conker breaks. The person that breaks the other conker is the winner.
5. The winner's conker gets one point and also gets any points that the broken conker had accumulated. (ie if a one-er breaks a five-er, the one-er becomes a seven-er (1 existing point + 1 point for winning + 5 points from the losing conker = 7 points)
6. If the strings get tangled, the first person to shout 'Stings' or 'Stringsies' gets another go.
7. If the conker falls on the floor, if the attacking player shouts 'Stamps' he gets to stamp on the conker and thereby probably end the game. However if the defending player manages to shout 'No Stamps' first the conker is saved and the game can continue.
8. There are various techniques for hardening a conker - ageing / baking / Soaking in vinegar, but this is generally considered cheating! ​